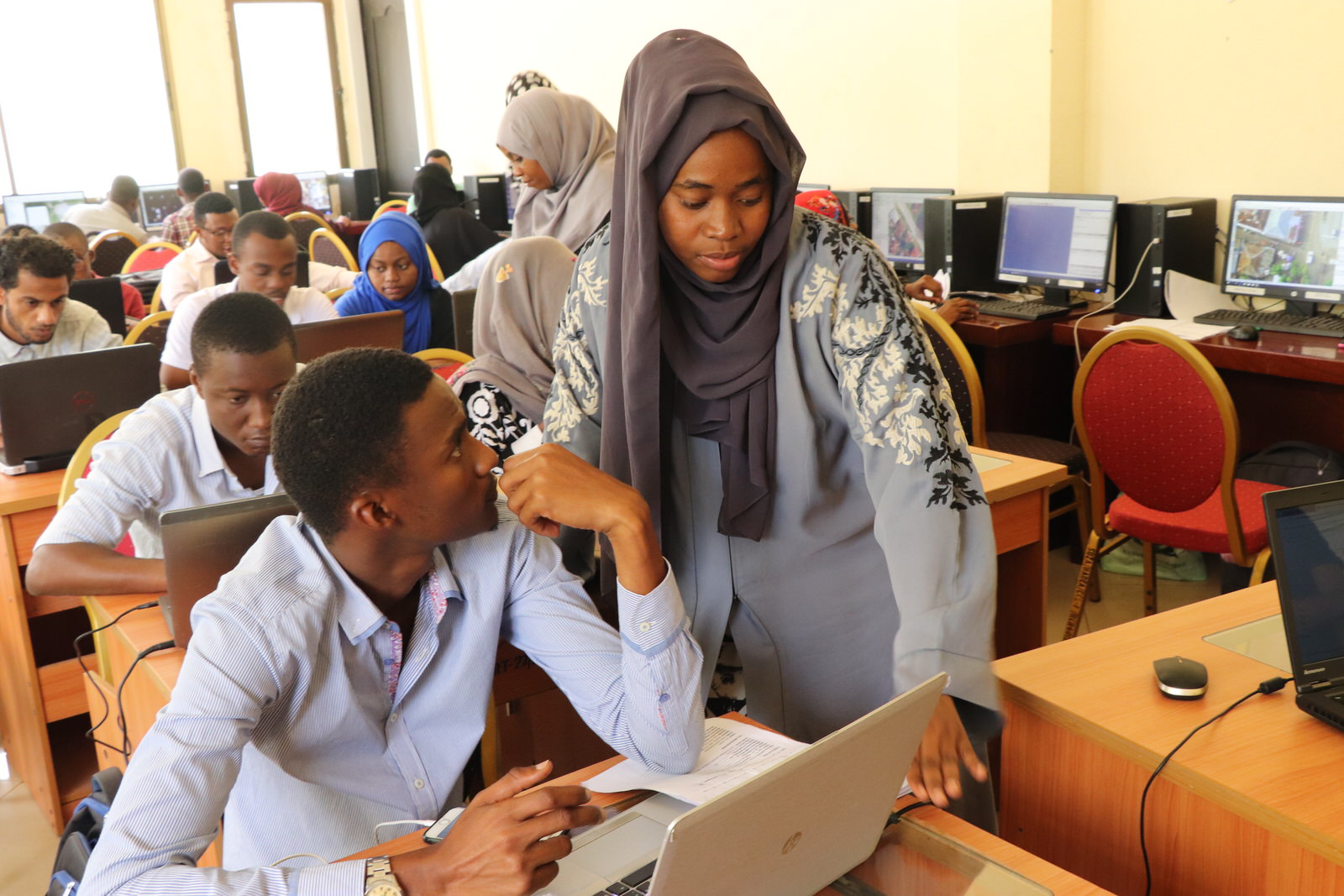 This year Ramani Huria is working with students from the University of Dar es Salaam and Ardhi University, aiming to extend to other universities in following years such as Sokoine University of Agriculture in Morogoro and the State University of Zanzibar.  The students participating in this summer’s program are from diverse academic backgrounds, including participants studying Urban Planning, Geomatics, Community Development, Environmental Science, Geography and Environmental Studies.

The increasing hazards of climate change, rapid urbanisation and population growth, are all contributing to increased flooding in Dar es Salaam, a situation which is set to escalate as the population expands from the current  five million people to almost double in the next ten years. This tremendous increase in population growth has resulted in a city comprised of over 70% informal, unplanned settlements, with a significant number of lower income inhabitants living in hazardous areas i.e. along major flood zones  such as the Kibangu, Msimbazi and Ng’ombe rivers.

Particularly for vulnerable populations, such as those living along the flood plains of Dar es Salaam, the need to be on a map is crucial. Mapping vulnerable communities proves their existence, their rights and their needs. By training local students to add to the map, we are empowering them, as future decision makers, planners and engineers, with new tools and knowledge, to make sure that every inhabitant is counted.

This summer, Ramani Huria will map 44 wards – about 200 subwards of the city – affected by floods in Dar es Salaam. To achieve this, more than 400 students will be trained to use simple and economical tools to map. The mapping will be done by conducting community meetings in these subwards and allowing community members and ward/subward leaders to identify assets (things that are important to them), threats (things that the community thinks may flood if the hazard continues unabated) and issues that contribute to flooding in their subward. A report on the pilot community meetings for this project can be found here.

The training kick off took place at the University of Dar es Salaam’s College of Information and Communication Technologies (COICT) Kijitonyama. Originally, 350  students were expected to join, but almost 600 hundred students arrived to join the programme. At first, it was a bit challenging to respond to the extra number of students, especially for the management team, but it was amazing to see such a big group of people interested in the project.

Introduction of the Project

The project was introduced to students by World Bank Community Engagement Consultant Nyambiri Kimacha, who mentioned how important the project is to the communities directly affected floods in the city and the students who are learning new technologies and simple mapping tools. She also showed her gratitude to the students who had signed up to the training,

“It is amazing to see all of these students (600) coming together to map the city to help in flood resilience.” – Nyambiri Kimacha, World Bank Community Engagement Consultant

HOT Tanzania Country Manager Ivan Gayton introduced students to the different activities that Ramani Huria is doing including drone development of a quadcopter, drainage mapping, elevation measurements and community outreach events. He motivated students to work together in helping the community in need who are affected by flooding, and also inspired them to learn new skills and develop their career goals.

“If you have seen how many people are affected by floods you will do community mapping for free! And with passion.” – Ivan Gayton, HOT Tanzania Country Manager

Briefing of Tools and Software

After this welcoming note from both HOT and the World Bank, students were introduced to the community mapping methods, open data and open software that are used for Ramani Huria. They learnt the importance of using open data in humanitarian response and how the international community that is utilising open data is expanding. Examples of the open software that Ramani Huria uses for data collection, processing and map production was introduced, including OpenDataKit (ODK), OpenMapKit (OMK), QGIS, and JOSM.

Students were introduced to the OpenStreetMap (OSM) platform, an online database that is a free, editable map being built by its users. OSM stores enormous amounts of data which is collected by local communities and remote mappers across the world .

“OSM data is from the (global OSM) community. OSM is owned by the community. You are the community, feel proud to be part of this community.” – Iddy Chazua, HOT Tanzania GIS Specialist

We had a lot of tweets coming out from students with the tag #communitymapping  about the training. The tweets demonstrated how excited the students were to be part of the OSM community.

Screenshot: some students’ tweets during the training

After the first day of orientation to the project, the students moved to the main training venue at Ardhi University, one of the key partners on the Ramani Huria project through which many student mappers have previously been recruited. The students were split into groups to receive more training. There are now six groups of about 100 students each with a diverse range of ages, genders and academic studies. Each group is led by one senior supervisor and three junior supervisors.

During the first week of training there was an introduction training on different software and applications that we use in mapping.

Using ODK and OMK is an easier way to collect enormous amounts of data since most students own android phones. These two applications (ODK & OMK) will be used by students to collect information in the field. Students have been learning practically how to collect field data using ODK and OMK, and have also been trained on how to create surveys on ODK to make them have a clear understanding on how the questions have been developed and deployed.

In celebration of World Clean Up Day which will be celebrated for the first time in Tanzania on the 15th of September 2018,  students will map trash in the city (mapping all formal and informal waste points in the city) using ODK. Ramani Huria will map trash in the city in collaboration with Nipe Fagio  the appointed lead partner in Tanzania by the Let’s Do It Global Foundation, for what has been called ‘the largest positive civic lead movement in world history’, with the aim to unite 5% of the global population in a one-day cleanup action, and making a plan to keep it clean. This will be the first real field experience for the students before commencing on mapping the 44 flood-prone wards of Dar es Salaam.

We will keep you updated on the progress of this large group of motivated students and the progress they are making in mapping a more flood resilient future for Dar es Salaam.

Training of the Trainers to University Experts